In Question Time today the Morrison Government was forced to acknowledge that it has not played an even hand when it comes to supporting Australia’s airlines through the Covid-19 crisis.

When asked if the Government would assist Virgin through the crisis, the Prime Minister has repeatedly claimed that any Commonwealth support would have to be done on a sector wide basis, including on 16 April.

JOURNALIST: Will the government bail out Virgin?

PRIME MINISTER: I will give the same answer I have given to this question each and every time, and that is, we as a government, appreciate the value of two competitive, viable airlines in the Australian economy, we are in a very unusual period at the moment but that is a good outcome to have in the Australian economy, that any responses that the Commonwealth government is going to have will be done on a sector wide basis, and that’s the way we will continue to pursue those issues…

On 21 April the Deputy Prime Minister also suggested that the Government could not assist Virgin through the COVID crisis because its foreign shareholders should step in.

But today it has emerged that the Government has provided a $54 million untied cash grant to Rex as part of its Regional Airlines Funding Assistance Program to support Rex Airlines’ cashflow during the pandemic period.

Labor welcomes support for Rex and its 1000 workers, and other small regional airlines hard hit by the travel restrictions.

But the Government needs to explain why one majority foreign owned airline was eligible for cashflow support, but the other wasn’t.

The Government must also explain to the 16,000 Virgin Australia workers and contractors why they have been left in the lurch when the jobs of Rex employees have been protected.

How is this a sector wide approach? 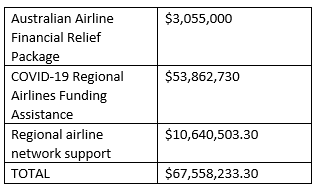 What you can read next

DIABETICS TO BEAR THE BRUNT OF TURNBULL’S LATEST HEALTH CUTS