Yesterday’s abolition of Sunday Penalty rates is just another step in a long line of attacks on workers by the Turnbull government.

The impact of these changes will be felt across Australia, but the impact on towns and communities in rural and regional Australia will be much harsher.

In Ballarat, our friends, family and neighbours will be hurt.

The retail and hospitality sectors account for 18% of rural workers. Census data says that retail workers already earn on average 7% less a year than their city counterparts. Working families who are already doing it tough will now have to cut their budgets right back and work more hours for less pay just to make ends meet.

This penalty rate ‘reform’ will directly hurt almost 1 in 5 Ballarat workers. It will have a serious impact on their families. It will drain money from our local economy, and it will hurt our community.

Retail and Hospitality workers are consistently some of the lowest paid workers in our community, and often by a large margin.

The penalty rates they can access pay for basic costs, and represent a valuable trade-off for sacrificing time with their family and working unsociable hours.

The removal of these penalty rates is something the Liberal government has wanted for a long, long time.

The Prime Minister might say that we live in a 24 hour economy but the truth is we don’t live in a 24 hour society – you can’t access his office at night, or the weekend, or over Christmas. Workers doing the extra hours deserve adequate compensation.

Malcolm Turnbull’s government has failed to introduce any legislation dealing with worker exploitation, whether the 7-11 ‘cash back’ scandal or underpayment of wages by national chains like Domino’s. They have done nothing about record low wage growth.

Their response to the housing crisis is to tell people to get a high paying job – then days later they cut the wages of the lowest earning employees in Australia.

This is a government that doesn’t care about Ballarat or regional Australia.

We cannot stand by and allow people on low incomes who rely on penalty rates to have their take-home pay cut. We cannot stand by while working people and families in our region become the losers in yet another government decision that will make their lives harder.

Families in Ballarat deserve better, and that’s why Labor has promised to strengthen the rules that guide the Fair Work Commission, so our lowest paid workers are protected from decisions that will make their lives worse. 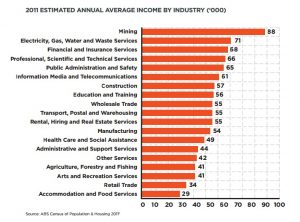 Source: The McKell Institute, “Who loses when penalty rates are cut?” http://mckellinstitute.org.au/wp-content/uploads/pdf/McKell_Penalty_Rates.pdf  Accessed 23/02/2017

What you can read next

HEALTH CHAOS AND CONFUSION AS LEY MOVES TO DITCH MRFF